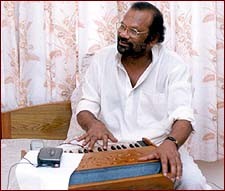 Here is a song from Raveendran which is beautifully rendered by Yesudas. Kalippaattamaay is yet another melodious number from the evergreen team of late Raveendran and K J Yesudas.

One of the most beautiful songs penned by Girish Puthenchery. And when the lyrics were given life by the magicians like Raveendran master and Yesudas, a beautiful song was born. Here is the song requested by another colleague and friend Sitara Anilal – Moovanthi thaazhvarayil from the movie Kanmadam.

Ore Kadal is one of my most favorite movies of the recent times and music has an important role in it. All the songs in this movie are composed in one raaga that is Subha Panthuvaraali and yet each song sounds different from the rest. The music composer Ouseppachan has done an amazing job with this and here is my attempt in singing Yamuna Veruthe.